The search continues for a lone gunman who ambushed two Los Angeles County Sheriff’s deputies while they were sitting in their patrol car at the Metro Blue station at Willowbrook Avenue and Compton Boulevard on Saturday, September 12, at about 6:58 p.m.

The Los Angeles County Board of Supervisors has authorized a $100,000 reward for information leading to the arrest and conviction of the suspect.

The gunman approached the passenger side of the vehicle and fired several rounds from his firearm at the deputies, striking them. The deputies sustained critical injuries and were transported to the St Francis Medical Center in Lynwood.

The suspect is described as a black male between the ages of 28 and 30. Authorities say he was wearing dark clothing and was last seen heading northbound on Willowbrook Avenue in a black four-door sedan.

Los Angeles Sheriff Alejandro Villanueva identified the deputies as a 24-year-old and 31-year-old mother of a six-year-old, who were both sworn into office 14 months ago.

“Every week, across the nation someone is losing their life in the line of duty,” Villanueva said in a press conference. “This is a grim reminder of that.”

The shooting prompted a response from President Trump, who tweeted, “Animals that must be hit hard!”

California Governor Gavin Newsom offered prayers for the recovering deputies and condemned the ambush shooting as a “cowardly, horrific act.” “The perpetrator must be quickly brought to justice,” Newsom tweeted.

“Someone’s daughter, wife, and mother, and someone’s son and brother attacked by a cowardly piece of garbage. When politicians and so-called media make heroes and martyrs out of criminals while demonizing the police, lies become truth, up becomes down, and wrong becomes right. I’ll sit by the TV and wait for these politicians, Hollywood hacks, athletes (entertainers), and TV show hosts to condemn this shooting. I think it will be a long wait.”

Homicide detectives are requesting the public’s in locating the suspect. Anyone with information is urged to call the Los Angeles County Sheriff’s Department Homicide Bureau at 323-890-5500. Information may also be reported anonymously by calling Crime Stoppers at 800-222-8477. 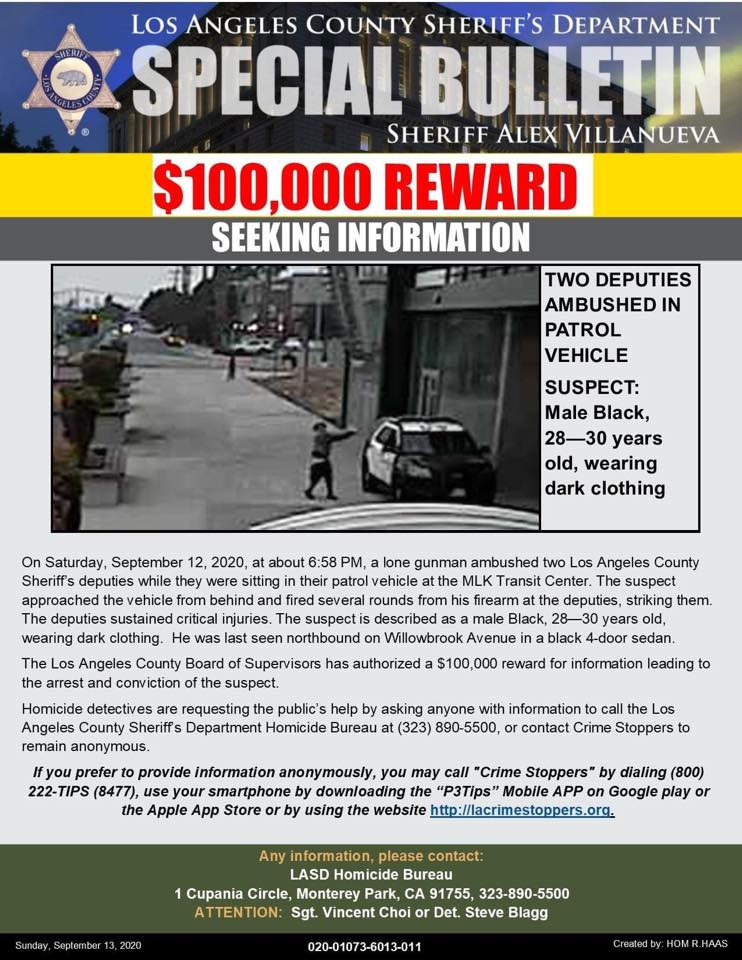 Taco Tuesday nights are over but there is one more opportunity to gather as a community at the lodge to enjoy the lake, the ambiance of a summer sunset, and

The City of Menifee is seeking local artists of all ages interested in showcasing their artwork at the upcoming Art-A-Fair on September 16, from 5 to 8 p.m. at the

The Canyon Lake POA announced the names of the seven applicants hoping to be appointed to the vacant seat on the board. The seat became vacant when Director Brian Bock

Animal Friends of the Valleys is partnering with NBC 4 and Telemundo 52 to help Clear The Shelters. AFV will be hosting an adoption event, Petchella 2022, on Saturday, August