The Lake Elsinore Sheriff’s Station -Special Enforcement Team has been investigating multiple after-hours business burglaries that occurred between February 14 and February 16 within the cities of Lake Elsinore, Wildomar, and Temecula.

During the extensive investigation, 22-year-old K’John Henry Sands of Compton was identified as the suspect in the burglaries.

On March 10, Sands was arrested in the City of Compton and booked into the Cois Byrd Detention Center for numerous burglary-related charges.

This is an ongoing investigation. Anyone with additional information is asked to contact Investigator Mills at the Lake Elsinore Sheriff’s Station at 951-245-3300. 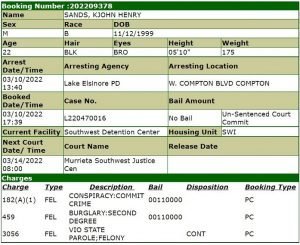 Taco Tuesdays are over but there is one more opportunity to gather as a community at the lodge to enjoy the lake, the ambiance of a summer sunset, and the

The City of Menifee is seeking local artists of all ages interested in showcasing their artwork at the upcoming Art-A-Fair on September 16, from 5 to 8 p.m. at the

The Canyon Lake POA announced the names of the seven applicants hoping to be appointed to the vacant seat on the board. The seat became vacant when Director Brian Bock

Animal Friends of the Valleys is partnering with NBC 4 and Telemundo 52 to help Clear The Shelters. AFV will be hosting an adoption event, Petchella 2022, on Saturday, August