Drunk driver suspected of causing death of pedestrian in Murrieta 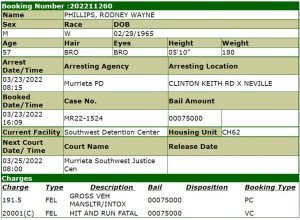 The Murrieta Police Department is investigating a traffic accident involving the death of a pedestrian. The accident occurred shortly after 8 a.m. on Wednesday, March 23, at Clinton Keith Road, east of Via Mariposa.

Murrieta Police Officers arrived on the scene at 8:12 a.m. and found a female lying on the north sidewalk of Clinton Keith Road suffering from significant injuries. Officers rendered aid and lifesaving measures, the news release stated.

Witnesses on the scene described a white, full-sized pick-up truck as being involved in the collision, which reportedly fled the scene prior to officers arriving. Officers canvassing the area located the truck a few blocks from the accident scene. The driver of the truck was identified as 57-year-old Rodney Wayne Phillips of Hemet.

Through witness statements and physical evidence, officers learned that Phillips was traveling west on Clinton Keith Road in the number three lane, east of Via Mariposa. An adult female was walking west on the north sidewalk of Clinton Keith Road in the same vicinity. Phillips’ truck drove onto the sidewalk and struck the pedestrian, authorities said.

The victim was transported to a local hospital with multiple life-threatening injuries. She later succumbed to her injuries.

Police say Phillips is suspected to have been driving while under the influence. He was arrested and booked into the Cois Byrd Detention Center for gross vehicular manslaughter while intoxicated and fleeing the scene of a fatal traffic collision.

According to multiple news sources, the victim was identified as 71-year-old Gloria Henry of Murrieta.

Menu
PrevPreviousCity of Perris: Three drive-by shootings within 34 minutes leads to three arrests
NextAMR employee from Wildomar suspected of sexually assaulting teenage patient in back of ambulanceNext
On Key

Cornerstone Community Church invites the community to its Trunk or Treat on Monday, October 31, from 5:30 to 8:30 p.m. The church is located at 34570 Monte Vista Dr, Wildomar.

The Canyon Lake Women’s Golf Club held its annual Member/Member Tournament on September 13, 15, and 20. The theme for the three-day tournament was Paradise Partners. The first two days