On March 2, an unidentified adult male took off his clothing, went into the backyard of a residence in 41000 block of Zinfandel Avenue in the City of Temecula, and sexually assaulted two adult females who were sunbathing, according to the Riverside Sheriff’s Department.

After clothing himself, the man left the property on foot and the victims called 911, according to Sergeant Jeff Reese. The Deputies located the suspect, 25-year-old Jacob Brian Paulsen, who was identified by the two female victims.

Paulsen was arrested for felony sexual assault and booked at the Cois M. Byrd Detention Center. His bail is set at $500,000. Paulsen is scheduled to appear in court on March 5, according to jail records.

Paulsen is a person of interest in another ongoing sexual assault investigation, according to the Riverside Sheriff’s Department.

This investigation is currently ongoing. Anyone with additional information is asked to contact Investigator Cornett at the Southwest Station at 951-696-3000. Citizens may also submit a tip using the Sheriff’s Crime Tips online form. 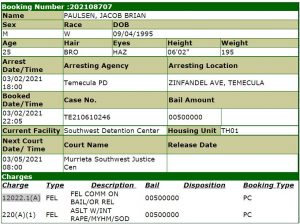 Due to a strict permit process, the Canyon Lake Ski Club will not be hosting Breakfast with Santa this year. Instead, the club will be hosting Cookies and Photos with

In October, the Canyon Lake POA Board of Directors approved a rule revision to limit the speed on the Vacation Park pump track to a maximum of 5 mph and

The Canyon Lake POA Board on Tuesday approved a 28-day reading to increase the fine for failure to comply with Community Patrol and Marine Patrol officers. The current fine of