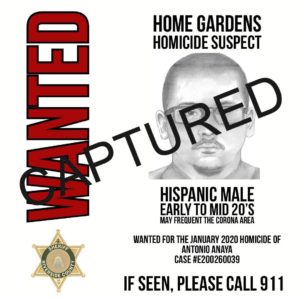 The Riverside County Sheriff’s Department announced that 31-year-old Eric Chaparro of Corona has been found and arrested. Chapparro is suspected of murdering 25-year-old Antonio Anaya on January 26. Jail records show that he was arrested on August 8 in Jurupa Valley.

On the evening of January 26, deputies from the Jurupa Valley Station responded to a call of an assault with a deadly weapon in the 3700 Block of Windsong Street in the unincorporated Riverside County area of Home Gardens.

Deputies arrived at the scene and found Anaya suffering from life-threatening injuries. Deputies rendered medical aid until emergency medical personnel arrived. Anaya was transported to a local hospital where he succumbed to his injuries.

The Canyon Lake POA Board approved a 28-day reading to revise LM.10.2b. Rule LM.10.2b requires all boats without a service seal to be inspected and complete a Canyon Lake POA

The Canyon Lake POA Board on Tuesday approved $630,000 plus an eight percent contingency from the Reserve Fund to replace and repair the medians on Canyon Lake Drive South. The