Two suspects, Andre Richee, 27, and Lee Mooring, 32, were detained at locations in Moreno Valley and Hemet. The suspect vehicle, a white Chevrolet Cruze, and the third suspect, Joseph Goldsmith, 28, were identified.

Richee and Mooring were arrested and booked for murder at the Robert Presley Detention Center on September 10. An arrest warrant for Goldsmith has been issued.

The Riverside County Sheriff’s Department is requesting the public’s help in locating Goldsmith. Anyone with information regarding the whereabouts of Goldsmith is asked to  contact Investigator Alfaro at 951-955-2777.

On September 7 at 9:08 p.m., deputies from the Moreno Valley Sheriff Station responded to the 22900 block of Allies Place regarding a report of an assault with a deadly weapon.

Upon arrival, deputies arrived located three male victims with gunshot wounds. The adult male, identified as 22-year-old Daniel Gonzalez of Moreno Valley, succumbed to his injuries at the scene. Two minors were transported to a local hospital with non-life-threatening injuries, according to Sergeant Ben Ramirez.

Anyone with information regarding this investigation is asked to contact Investigator Alfaro with the Central Homicide Unit at 951-955-2777. 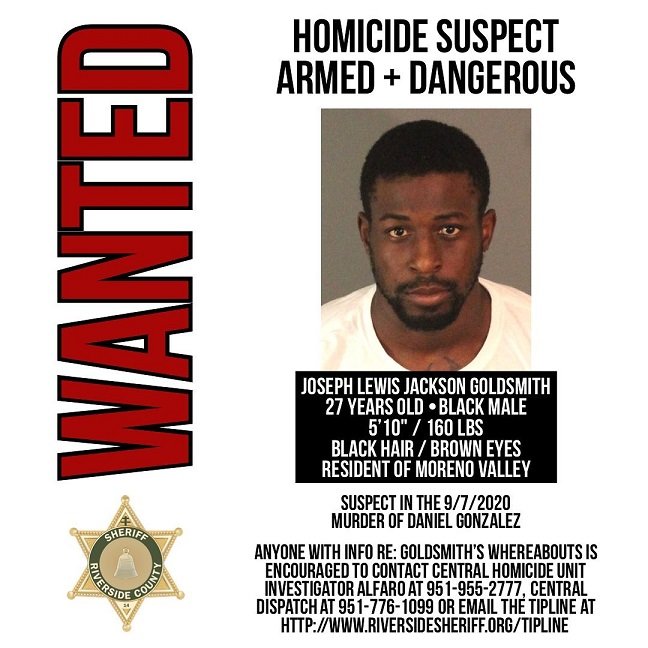 Canyon Lake Fire Station lights up for the holidays

The Canyon Lake Senior Chair Volleyball Club invites residents ages 50 and better to join them on Mondays and Thursdays from 9 to 11 a.m. at the lodge. Games are

Canyon Lake resident and former police officer Frank Opp and his son, Trevor, are gearing up for the 22nd Annual Santa Claus Ride on December 24. This annual event benefitting

Hell’s Kitchen Motorsports Bar and Grill invites the community to its inaugural Holiday Craft Fair on Sunday, December 4, from 11 a.m. to 5 p.m. at its new location at

Canyon Lake Fire Station lights up for the holidays

The firefighters of Canyon Lake Fire Station 1 kicked off the holiday season with the lighting of the fire station on November 25. The station is decorated with lights, projectors,