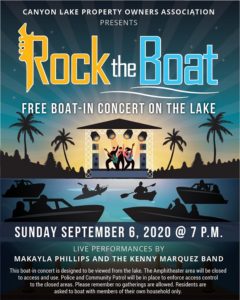 The Canyon Lake POA, with the help of “Concerts at the Lodge” concert promoter Doug Schultz, is hosting a free concert on the lake for the community on Sunday, September 6, from 7 to 9 p.m.

The “Rock the Boat” concert will feature performances by Makayla Phillips and Kenny Marquez.

The lake will be closed to 5 mph at 5 p.m. Marine Patrol will allow boats to anchor in front of the amphitheater starting at 6 p.m. Residents are asked to boat with members of their own household.

The performers will be facing the lake and performing for those in boats. The audio will be broadcast on an FM frequency and, weather permitting, a large screen will be set up next to the stage.
Gatherings at the amphitheater will not be permitted. Law enforcement and Community Patrol will be stationed at the amphitheater to enforce access control to the closed area.
Advertisement

Due to a strict permit process, the Canyon Lake Ski Club will not be hosting Breakfast with Santa this year. Instead, the club will be hosting Cookies and Photos with

In October, the Canyon Lake POA Board of Directors approved a rule revision to limit the speed on the Vacation Park pump track to a maximum of 5 mph and

The Canyon Lake POA Board on Tuesday approved a 28-day reading to increase the fine for failure to comply with Community Patrol and Marine Patrol officers. The current fine of