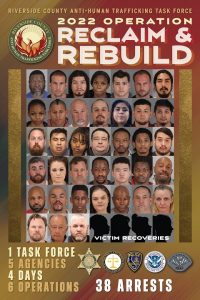 Operation Reclaim & Rebuild is an annual multi-agency statewide initiative that focuses on rescuing victims of sexual slavery and human trafficking, identifying and arresting their captors, and disrupting demand for these vulnerable victims. The operation is timed to coincide with National Human Trafficking Awareness Month and serves as a reminder that human trafficking will not be tolerated in California.

The task force arrested 31 males and seven females for solicitation of prostitution including 4 adult victims rescued. Task force officers also made contact with two adult females believed to be victims of sex trafficking. Initial investigations led the task force to believe these subjects were being forced to engage in acts of prostitution against their will.

Task force officers placed decoy advertisements on popular classified advertisement websites commonly used for the solicitation of prostitution. These officers then responded to prospective customers who replied to these advertisements.

Once an agreement for prostitution was brokered, the customers were arrested upon their arrival at a pre-determined meeting location. Concurrently, other task force officers negotiated agreed-upon acts of prostitution based upon other escort advertisements that were posted online in the area. In these instances, females who responded to the undercover officers posing as customers were directed to meet. After their arrival and an interview, if the females were determined not to be victims of human trafficking, they too were arrested.

The following individuals were arrested during the operation:

Arrested during the operation for solicitation of prostitution and carrying a loaded firearm:

Arrested during the operation for solicitation for prostitution, possession of a controlled substance and paraphernalia:

Arrested during the operation for solicitation of prostitution:

Suspects arrested during this operation were transported to the detention center in the closest proximity to the operational area(s) each day. Following booking, each arrestee was ultimately released upon their written promise to later appear in court, according to authorities.

The RCAHT Task Force is a multidisciplinary task force that combines the investigative resources of both local and federal law enforcement. The RCAHT Task Force also provides victim services and education/outreach through partnerships with the non-profit groups Operation SafeHouse, Rebirth Homes, Run 2 Rescue, and Million Kids.

All suspects are presumed innocent until proven guilty in a court of law.

The Riverside County Board of Supervisors today ratified the proclamation of a local health emergency due to MPX (monkeypox). On August 8, Riverside County Public Health Officer Dr. Geoffrey Leung

The Mermaids of Canyon Lake Club is giving back to the community by hosting a free drawing for a breast cancer awareness quilt. The club is seeking names of individuals

Canyon Lake’s 16th Annual Car Show is scheduled for Saturday, October 1, from 9 a.m. to 3 p.m. at the lodge. Admission is free. Hosted by the Canyon Lake Car