A suspect has been identified in a homicide that occurred on Tuesday in the area of Thornton Avenue and Hemet Street in the unincorporated area of Hemet.

On March 8 at about 11:52 p.m., Hemet Sheriff’s Station deputies responded to a call of an assault with a deadly weapon and learned that an adult male had been transported to a local hospital where he later succumbed to his injuries.

Investigators from the Hemet Sheriff’s Station and the Central Homicide Unit assumed the investigation and identified the suspect as Mike Aguilar, a 42-year-old resident of Hemet. Aguilar was arrested and charged with murder.

The victim’s identity is pending next of kin notification.

This is an active investigation. Anyone with information or video regarding this incident is asked to contact Central Homicide Investigator Magana at 951-955-2777. 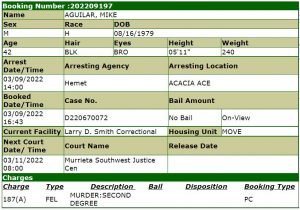 The Mermaids of Canyon Lake Club is giving back to the community by hosting a free drawing for a breast cancer awareness quilt. The club is seeking names of individuals

Canyon Lake’s 16th Annual Car Show is scheduled for Saturday, October 1, from 9 a.m. to 3 p.m. at the lodge. Admission is free. Hosted by the Canyon Lake Car

The Solar Project approved by the POA Board of Directors in April is scheduled to begin in the fall, the POA announced. Solar panels on steel carport structures will be installed over