Two suspects arrested for rape in City of Wildomar

Two suspects have been arrested for a rape that occurred in the 22000 block of Country Hills Drive in the City of Wildomar.

On March 9, Lake Elsinore Sheriff Station Investigators concluded an ongoing investigation regarding a past sexual assault that occurred in the City of Wildomar. The investigation led to the arrest of 22-year-old Jacob Emery Stutzman of Murrieta and 22-year-old Mario Samuel Lopez-Suazo.

Lake Elsinore Station Investigators and the Special Enforcement Team located both suspects at their respective residences. They were detained without incident. After being interviewed at the Lake Elsinore Sheriff’s Station, Stutzman and Lopez-Suazo were booked into the Southwest Detention Center for rape. Their bail was set at $500,000, according to jail records.

Anyone with information regarding this investigation is asked to contact Investigator Rodriguez at the Lake Elsinore Sheriff’s Station at 951-245-3300 or the Riverside County Sheriff’s Dispatch Center at 951-776-1099. 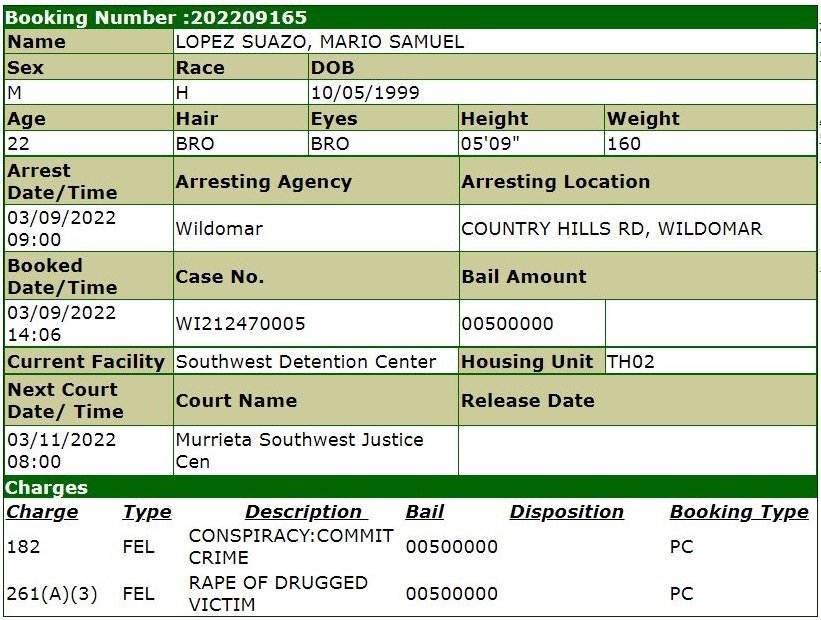 City of Wildomar to host Breakfast with Santa

City of Murrieta to host Donuts with Santa

Letter to the Editor: Parade of Frights

City of Wildomar to host Breakfast with Santa

The City of Wildomar invites the community to eat breakfast with Santa on Saturday, December 10, from 8 to 11 a.m. at Fire Station 61, 32637 Gruwell St. Enjoy breakfast

Temecula On Ice is returning to Town Square Park for another holiday season with a state-of-the-art ice rink, rental skates, Bobby skating aid, and its own radio station playing ice

City of Murrieta to host Donuts with Santa

The City of Murrieta invites the community to join Santa for donuts on Saturday, December 3, from 9 to 10:30 a.m. at Town Square Park Amphitheater. Dunkin’ Donuts will be

Letter to the Editor: Parade of Frights

Editor, The Canyon Lake Chamber of Commerce would like to thank our sponsors, our board of directors, the event volunteers, the City of Canyon Lake, and the Canyon Lake Property